Thx to debono9 for the heads up. There is a fan translation going for Miles Edgeworth 2 at this location: [z11.invisionfree.com/court_records].

The patch translates all the common screens of the game (title screen, case selection screen, save screen, profile/evidence screen), all the text, all the graphics (yes, including backgrounds, sprites and even evidence) and all the voices (recycled the old voices when possible or dubbed by voice actors for the new characters) in English for all cases.

According to wikipedia article: “In January 2013, Svensson was again asked about.. Gyakuten Kenji 2 localization, and he responded… there were no news to report, and that all Ace Attorney resources, especially localization ones, were focused on Ace Attorney 5.[17] It was widely assumed that Gyakuten Kenji 2 wasn’t localized due to poor sales but producer Motohide Eshiro stated 'The main reason was just scheduling… Also, the staff for Ace Attorney Investigations 2—after they finished developing the game, they were disbanded and went to different teams, so they weren’t in a position to localize.'[18]'

It looks like the commercial localization was cancelled so now fans have taken it up upon themselves to do the localization, [see gbatemp.com].

“In short then:
Case specific graphics: completed all but inserted only case 1 (and probably 2).
Common graphics: done
Voices (case specific): done but not inserted yet.
Common text: done and inserted
Case specific text: Case 1/2 complete and inserted, case 3 WIP.
Literal translation: continuing case 3 and big jump forward expected while/end of the summer
Localization/insertion: same as above
ASM work: throw back but or no affect on the progress or a big boost expected (no timeline for this)
Bug fixing: expected to be completed next month.
Release date: unknow
Release version: unknow
Cases covered by the patch on first release: The first release will be a partial patch for sure and will include Case 1 complete.
Release compatibility: emulator and real hardware targeted (if your flashcard can not play the AP patched japanese rom, you will probably not be able to play the translation either!)”

A partial patch containing Case 1 Completed will be appearing soon (probably end of summer?).
You can follow the progress of the translation here: [gbatemp.com]

–Description-
The game follows prosecutor Miles Edgeworth, detective Dick Gumshoe and the teenage thief Kay Faraday, who investigate five cases; they face off against judge Hakari Mikagami, a rival character who is part of a “prosecutor purge” that removes weaker prosecutors from duty. The gameplay is divided into two types of phases: investigations, where the player searches the crime scene for evidence and talks to witnesses, and rebuttals, where they aim to find contradictions in witnesses’ testimonies using the evidence found during the investigations. 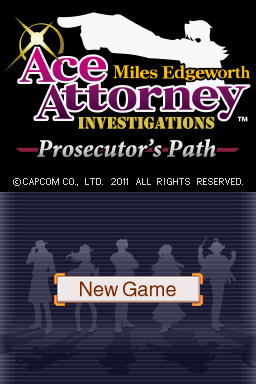